This too may be dismissed as Jewish anti-Islam propaganda. However the average moslem in the streets of Europe understands that he is there to colonize and supplant Western society. It is no coincidence that the vast majority of "refugees" are men between 20 and 50 years of age, who brought no family to Europe. 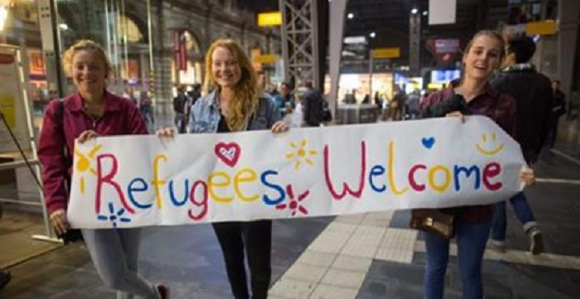 Pictured above, Swedish women happily invite hundreds of thousands of so-called “refugees” to come and live with them, perhaps imagining that the “refugees” are nice people like themselves and share their civilized values. They seem to be absolutely impervious to the idea that the aliens are actually uncivilized, savage beasts intent upon destroying them and their culture and supplanting them in their own homes.

In the video below, newly arriving "refugees" are given a hero's welcome by smiling Germans in Munich. Like many other photos and videos used by the mainstream media in their reports on the "refugee crisis", we suspect that this event was also staged. 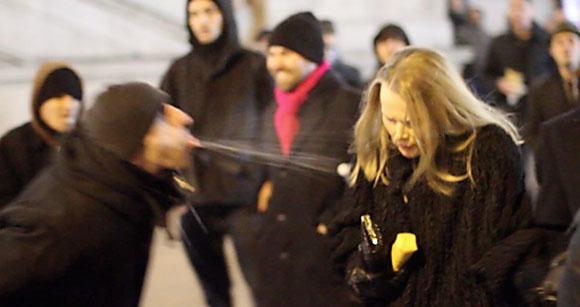 So we see these images from Germany, taken shortly after that nation had allowed the entry of swarms of “refugees” this past winter. And indeed, they have come in swarms, the great majority of them being men in their twenties through forties, looking for women and loot. Given the expectation of “benefits” upon reaching Europe, the hope of which they had received from the Jewish-controlled media, they have an entitlement mentality even before they cross the border, and their lusts for handouts and free sex from White women will never be satiated. When sensible women resist, they suffer brutal acts of violence at the hands of these lustful beasts. The beasts were given the impression that White European women would always be warm and welcoming, and more than willing to have sex with them. 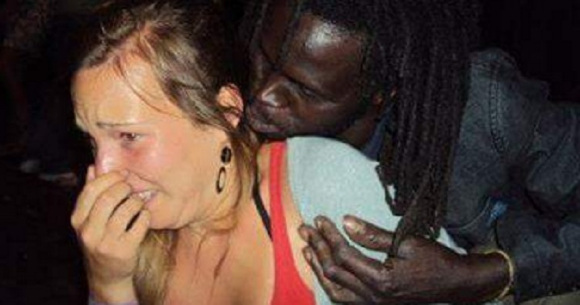 But rather than protect Germans who complain, or who venture to stand up to these “rapefugees”, the German police protect them and persecute their fellow countrymen instead. It took days for the German police to admit that 516 German women of all ages had reported being attacked, many of the attacks including unwanted sexual contact, from moslem men - and that was just on New Year's Eve in Cologne (as reported by the BBC). However even the use of the term, rapefugee, by Germans concerned for the safety of women in their native country invites harassment and arrest by police. As it has already happened in Britain and Scandinavia, police and other government agenices in Germany have also become mercenary agents for the powers intent on destoying the European people. According to some sources, the leader of the Pegida movement in Germany is facing prosecution simply for wearing a t-shirt which contained the message “Rapefugees Not Welcome” (as reported by Breitbart.com). On January 9th, non-violent Pegida protestors in Cologne were forcibly dispersed by police using water cannons and pepper spray.

So the frequency of rape has risen to epidemic proportions in Sweden and Norway, and Germany is next. Swedes are complaining that they cannot talk about the frequency of rapes there, where Islamic men, reportedly only 2% of the population, have committed 77% of the reported rapes (as reported by frontpagemag.com). In one particularly brutal case, a Swedish woman was recently gang-raped by moslem Somalis while forced to the ground atop broken glass, as the Danish news website 10newsdk has recently reported. The odds of a Swedish woman being raped during her lifetime is now one in four. The major news outlets generally ignore all of the pertinent reports, not wanting to present anything that would turn public opinion against immigration.

It is our obligation to consistently bring these things into the consciences of our fellow Whites of European descent. However we have already written of the reasons why these things are happening in many of our articles at Christogenea, which have been published here at the Saxon Messenger. We wrote The Immigration Problem and Biblical Prophecy in 2008. We wrote No Safe Haven and Stripped Bare and Naked in 2013, and then we wrote The Camp of the Saints Revisited in 2015, as well as many other articles which have discussed various aspects of this topic.

War is being waged against the European peoples, and how many times we may repeat ourselves before it is commonly acknowledged is not our concern: we will keep repeating ourselves. Of course, many others have also written on this topic. But we claim to know why these things are happening, beyond the obvious reasons and the simple cries that “It's the Jews”. Of course it's the Jews. But why is it the Jews, and who are the Jews, really? And why do so many Whites go along with the desires of the Jews? Those are the questions that we can answer, where the typical anti-Christian White nationalists shall always fail.

If you truly love your fellow White Europeans, please review our work at Christogenea.

Mass immigration is not a natural disaster akin to some tsunami, drought or earthquake that periodically and unpredictably overwhelms a country. Mass immigration is a purely man-made phenomenon which is encouraged openly or covertly by people who benefit from it economically or by people who for ideological reasons wish to see England looking like some failed Third-World state, Pakistan, for example.

Mass immigration, especially mass non-white immigration, poses real dangers for the future of England. The idea that England can survive the mass, continual influx of hundreds of thousands of non-white immigrants is hideously naïve. As the white indigenous people of England are relentlessly displaced by the rapid and aggressive breeding of non-whites, the whole texture and nature of our towns and cities will be changed forever, is already changing, and, in some places, Bradford, Birmingham, whole swathes of London, have already changed for the worse.

I do not regard these huge, unprecedented changes, changes which were imposed on the white indigenous English without any consultation or any regard for England’s future, with no regard for the links to our past and heritage, as in any way beneficial. In every possible regard they are disastrous. As I have made clear to you before, the changes brought about by mass, non-white immigration represent the racial, cultural, physical and psychological dispossession of the white indigenous English.

Get out, Traitor! - German People chases Minister of Justice.mp4

This is from Face of a dying Nation at Youtube. Here is their text accompanying the video:

Heiko Maas, the German Federal Minister of Justice, was unable to finish his Labor Day celebration speech on the 1st of May as he was loudly booed and chased off the stage by the German people. The people repeatedly shouted "Traitor", "Leftist Rat", "Get out!", "We are the People" and "Maas must go!", eventually getting him to cancel his speech and flee to his armored vehicle escorted by his armed bodyguards.

Maas is considered one of the biggest proponents of expanding censorship laws, demanding persecution, fines and jail-time for everybody posting "hate speech" on social media.

He also does not acknowledge the existence of the German people, backing his party, the Social Democrats, in the opinion that Europe was always made up of immigrants and Germany's only chance of redemption for the eternal guilt of World War 2 is inviting as many Muslim immigrants as possible.

His party took devastating losses in polls across the country, losing to the Alternative for Germany (AfD) by a landslide in the last state election of Saxony, where he held his speech.

Maas' party recently published plans to build 350,000 entirely new homes for "newcomers" to solve the "demographic crisis". In his speech he claimed that "the people shouting 'traitor' don't even know what's happening to them". But it appears that they know very well what is being done to them.
The German people are confused and angry about why they're told that they have to be frugal and avoid having children because of the immense cost while simultaneously working their fingers to the bones to fund a foreign invasion.

The people in the audience hence ridiculed him for claiming that the actual workers in the audience "hijack Labor Day". The hypocrisy of celebrating Labor and fair wages while his party supports the import of millions of unskilled workers is what got him chased off the stage.

Orthodox Christians in Russia are evidently doing what the rest of the West should have been doing decades ago: taking a stand against immorality. But why is it the Orthodox Christians who are "radical", as this RT reporter identifies them? In reality, it is the sexual deviants who are the true radicals!

Is this the Scotland of Robert Burns and William Wallace? We had a piece on this story ijn the February Saxon Messenger. The synopsis of the Robert Green case below is courtesy of Mr. Mike Green, to whom we are appreciative.

This video was produced by the "Christian Broadcasting Network". However there is just as much racial violence perpetrated against Whites by Mexicans and Negroes in the United States which that same network ignores. Could it be that is because the Mexicans and Negroes are not all muslims? Of course, the CBN serves their Jewish masters. Yet Whites, Christians or not, must awaken to racial realities in one way or another - or become extinct.