This too may be dismissed as Jewish anti-Islam propaganda. However the average moslem in the streets of Europe understands that he is there to colonize and supplant Western society. It is no coincidence that the vast majority of "refugees" are men between 20 and 50 years of age, who brought no family to Europe.

Get out, Traitor! - German People chases Minister of Justice.mp4

This is from Face of a dying Nation at Youtube. Here is their text accompanying the video:

Heiko Maas, the German Federal Minister of Justice, was unable to finish his Labor Day celebration speech on the 1st of May as he was loudly booed and chased off the stage by the German people. The people repeatedly shouted "Traitor", "Leftist Rat", "Get out!", "We are the People" and "Maas must go!", eventually getting him to cancel his speech and flee to his armored vehicle escorted by his armed bodyguards.

Maas is considered one of the biggest proponents of expanding censorship laws, demanding persecution, fines and jail-time for everybody posting "hate speech" on social media.

He also does not acknowledge the existence of the German people, backing his party, the Social Democrats, in the opinion that Europe was always made up of immigrants and Germany's only chance of redemption for the eternal guilt of World War 2 is inviting as many Muslim immigrants as possible.

His party took devastating losses in polls across the country, losing to the Alternative for Germany (AfD) by a landslide in the last state election of Saxony, where he held his speech.

Maas' party recently published plans to build 350,000 entirely new homes for "newcomers" to solve the "demographic crisis". In his speech he claimed that "the people shouting 'traitor' don't even know what's happening to them". But it appears that they know very well what is being done to them.
The German people are confused and angry about why they're told that they have to be frugal and avoid having children because of the immense cost while simultaneously working their fingers to the bones to fund a foreign invasion.

The people in the audience hence ridiculed him for claiming that the actual workers in the audience "hijack Labor Day". The hypocrisy of celebrating Labor and fair wages while his party supports the import of millions of unskilled workers is what got him chased off the stage.

No wonder so little has been done about Rotherham, what with Pedophiles and those who shelter them running the British government.

This exposé of high level child abuse in Westminster is from 60 minutes Australia.

Amongst statements supporting pedophilia which have been endorsed by current British Labor Party leadership are the following:

"We can't prove sex with children does them harm."

"Childhood sexual experiences willingly engaged in, with an adult result in no identifiable damage."

The above quotations are from an official position paper of the National Council for Civil Liberties while British Labor MP Harriet Harman was its legal officer, and British Labor MP Patricia Hope Hewitt was its general secretary. See The truth about Labour's apologists for paedophilia: Police probe child sex campaign group linked to three top party officials in wake of Savile scandal.

The wolves have long ago taken over the sheepfold.

The Daily Mail has just reported something on the Swedish rape crisis in an article titled Two 10-year-old schoolgirls molested and a woman's trousers ripped off: Inside the sleepy Swedish town rocked by EIGHT sex attacks in three weeks by migrant men. But the Swedes keep admitting these sexually aggressive migrants with no concern for the native human population and the preservation of its species.

However the native lobsters have no worries, because the Swedes will appeal for their salvation, and defend them from intrusive and sexually aggressive invaders. The Guardian has just published an article under the title Invasion of the American lobsters: Sweden asks EU for help. Evidentally, lobsters from North American waters are replacing the population of native lobsters off the coasts of Sweden. Here is what it says, in part:

They pose several potential risks for native species, competing for space and resources, they can interbreed with local species and produce hybrid species, which we don’t know will be viable or not,” said Dr Paul Stebbing of the Centre for Environment, Fisheries and Aquaculture science. 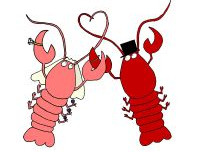 As a friend said while commenting on this article in the Christogenea Forum, it is quite ironic that the language that is used to describe these invasive lobsters seems much more appropriate for the flood of arabs and negros who are their real problem. Of course we must agree. Arabs and negros are sexually aggressive invaders with a disdain for Swedish law and culture, who only seek to supplant the Swedish population with bastards, and create an Islamic desert in the snowy north. The Guardian article continues to speak about lobsters:

Oversexed, overfed and over here: that, in a nutshell, is what the Swedes think of the American lobster from Maine, New England. It may be much sought after in restaurants but Sweden does not want the American crustacean to darken EU waters in case it spreads diseases and kills off its smaller cousin.

So arab invaders can darken Sweden itself... and evidently Swedish lobsters are much more valuable than Swedish women, or future generations of Swedes. But what if some of the Swedish lobsters want the American invaders? The irony amazes us, but the hypocrisy is literally killing Swedes.

The CBS News 60 Minutes crew is about to enter a neighborhood in Sweden which is actually a Somali squatter colony. The cameraman is run over by a car. They call the police, but the police won't escort the crew through neighborhood, telling them they are better off without them. The reporter then attempts to portray any Somalis who would talk to them as if they were benevolent, not considering other possible motives. But it is not long until they are attacked again. The liberal reporter tries reasoning with beasts, and cannot really understand their nature. Will she ever learn, that these Somalis are not people? Rather, she was pleading with them like a mother to a child, but they had no care for her correction.

This reporter is rather fortunate that she was not dragged off and raped. In 2011, when CBS reporter Lara Logan thought she could stand in a crowd on the streets of Cairo and report on rioting Egyptians, they stripped her naked and raped her. Would she ever understand that she was raped by beasts, and not by men? The insolence of liberalism is that it insists it can defy nature, and form creatures who are beasts in its own image of what people should be.

The Jewish AntiFa group that call themselves the "Young Turks" think there is a problem with these people. But instead, Whites everywhere should be proud of them for standing up for themselves, and to hell with the "Young Turks". Oh, and since when is "Turk" a euphemism for Marxist Jew?

Dutch riot over plans for a refugee centre.mp4

The following two paragraphs are from the article German Bond Bid Failure: Revenge of The Bankers at the investors' website SeekingAlpha.com, The article was written by Joseph Calhoun, and explains very briefly why and how the German nation is a whore chained to the bed of the bankers. The bottom line is that the taxpayers will be forced to cover the bankers' bad loans, and Italy and Greece will continue to borrow into default, until the bankers own all of Europe, and sell cheap it to China, Russia and whoever (and probably mostly to jews)!

Germany got a wake up call last week when an auction of 10 year government bonds failed to get bids for 35% of the bonds offered. While German bond auction failures are not as infrequent as one might imagine – six of the last eight auctions received fewer bids than the maximum amount of bonds offered – this one, coming in the midst of the European debt crisis, was perceived to be more ominous. If the strongest economy in Europe can’t sell all of its bonds, what chance does Italy or Greece have? Some have opined that this failure means the euro crisis has entered a new phase and that Germany itself – the one government in Europe thought capable of ending the crisis – is now at risk. It was more likely a power play by Europe’s bankers intended to send a message to Merkel and Schaeuble. And it appears the message was received.

Schaeuble has been at the forefront in Germany demanding that banks share losses in any sovereign bailouts that come via the European Stability Mechanism to be established next year (moved up from 2013). The failed German bund auction last week was the banks reply and Schaeuble almost immediately backed down. Friday, Schaeuble told reporters that “(i)f we now manage to move toward a stability union, we’ll see how one might possibly adjust the treaty”. Bankers 1, Schaeuble 0. It would appear the bankers are firmly in charge of Europe now and have no intention of playing the patsy. The banks were given an incentive to buy sovereign debt under the Basel committee rules that essentially made all European sovereign debt risk free. Banks could own European sovereign debt – no matter the country of issuance – without having to reserve for potential defaults. Europe’s governments, having fixed the rules to ensure a market for the bonds to fund their welfare states, now want to renege – and the bankers are having none of it. Click here to read more.

Jesse Jackson _The Death of the Swedish People Should Not be-1.mp4

Negroes are not at all smart; rather they simply have no shame. But could Swedes possibly be so stupid?

Jesse Jackson goes to Sweden to basically tell the Swedes that because of "their" slave-trading two hundred years ago, today they must let themselves be overrun with Negroes and Asians. And quite disgustingly, the Swedes applaud! How many Swedes of today ever owned or traded in slaves?

Jackson was telling the Swedes to accept the end of their nation and race, and the Swedes were applauding him for it? Did they ever actually understand what he was saying?

Jackson won't actually live to see the end of Negroes and Jews, but God will not be mocked!