Home invasion: Bob and Nancy Strait were both attacked when burglars broke into their home in Tulsa. Mrs Strait died of her injuries.

It is apparent, at least, that there was nothing about this in the national media in America. That is because the American media has a goal to portray only blacks as victms, and Whites as criminals. Nothing could be further from the truth. In reality, the American media is encouraging negro race-riots, and possibly a war between the races, in order to fulfill a greater agenda: the final destruction of whatever is left of the American Republic. The media's biased reporting is irreprehensible, and can only be explained once it is understood that it leads an organized agenda. - WRF

The following is from the Mail Online:

Couple met and married within a month and stayed together for 65 years... only to be parted after home invader beat wife to death

An 85-year-old woman was sexually assaulted and battered to death by a home invader who also shot her 90-year-old husband in the face with a BB gun.

Nancy and Bob Strait, who had celebrated their 65th wedding anniversary in December, were discovered by their daughter at their home in Tulsa, Oklahoma.

Both the pensioners were rushed to hospital where Mrs Strait, who was nearly blind, died from her injuries.

Mr Strait, who served in the 101st Airborne Division in World War II, suffered a broken jaw, broken ribs and severe bleeding. He is in a serious condition in hospital.

Police have arrested 20-year-old Tyrone Dale David Woodfork in connection with the case.

The Straits' distraught family today paid tribute to the pair, who grew up in poverty in rural Oklahoma during the Great Depression.

Their daughters Lanora and Andra told Tulsa World that the couple were loving and generous people who would do anything for anyone.

'Whatever she did, it came from the heart,' Andra added.

The pair could be found sitting on their porch singing and playing the guitar during warmer summer evenings.

Mr Strait, who had worked for the oil derrick supply company Lee C. Moore before retirement, enjoyed woodwork while his wife loved making quilts and baking. 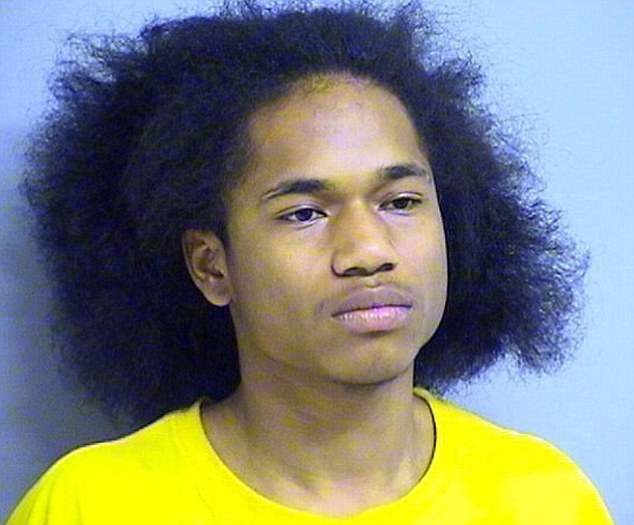 Suspect: Tyrone Dale David Woodfork, 20, was arrested a day after the attack on complaints of first-degree murder, burglary, assault with a dangerous weapon and two complaints of armed robbery.

They had both been struggling with health problems before the attack. Mr Strait had been diagnosed with a terminal kidney illness but had outlived the doctor's prognosis.

'He was living because Mother was alive,' Andra told Tulsa World.

The couple had had food poisoning the week before the attack.

'We pray he doesn't remember.'

Tulsa police believe burglars broke into the Straits' home either late Tuesday or early Wednesday last week. They were not found until the Wednesday evening.

The home invaders made off with their Dodge Neon, a television and $200.

Woodfork was later found hiding in a nearby house after a witness spotted the stolen vehicle being driven down the road.

He is being held at Tulsa Jail without bail accused of first-degree murder, burglary, assault with a dangerous weapon and two counts of armed robbery.

'This investigation is far from over,' Officer Jason Willingham of the Tulsa police department told Tulsa World. 'We've still got a lot of questions that we still need answered.'

Mrs Strait's funeral will be on Friday. The family has set up a fund the Nancy Strait and Bob Strait Support Trust to help pay for the service and her husband's medical care.

Life together: The couple went on to have six children, 18 grandchildren and about 50 great and great-great grandchildren all after marrying a month after meeting 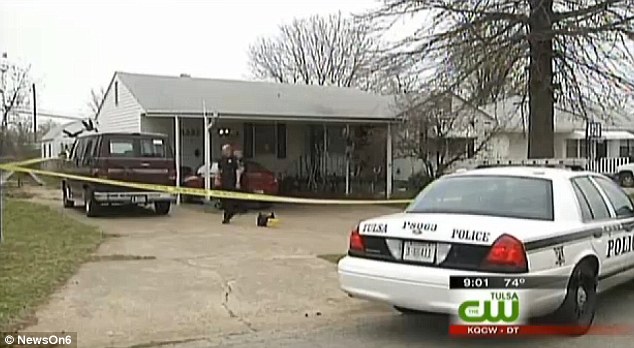 Attack: One of the couple's daughters discovered her parents unresponsive in their Tulsa home with their car, a television and $200 among the items missing 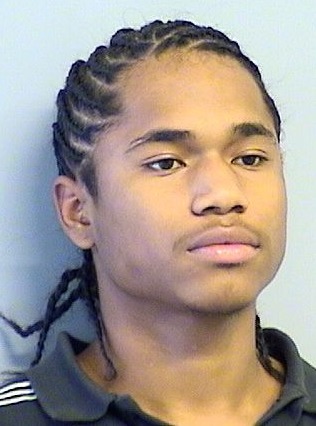 The beast later cleaned up for public viewing.