"Keep bashing the dead white males, and the live ones, and the females, too, until the social construct known as the white race is destroyed. Not deconstructed, but destroyed."
--- Noel Ignatiev, Jewish Harvard professor and editor of Race Traitor magazine (Washington Times, September 4, 2002)

"The white race is the cancer of human history."
--- Susan Sontag (much-celebrated Jewish  "intellectual," whose recent passing was lamented loudly in Jewish circles)

"I don’t care about your idiot children."
--- Willie Brown (Mayor of San Francisco, to a white parent complaining that affirmative action would penalize his children), quoted in The Social Contract (Summer 1998, p. 290)

"Q:  What kind of world do you want to leave to your children?
A:  A world in which there aren't any white people. . . ."
--- Leonard Jeffries (chairman of the African-American studies department of the City College of New York), interviewed by T.L. Stanclu and Nisha Mohammed, Rutherford Magazine (May 1995, p. 13)

"You guys have been practicing discrimination for years.  Now it is our turn."
--- Black Supreme Court Justice Thurgood Marshall (in a conversation with Justice William Douglas about racial preferences), quoted by William O. Douglas, The Court Years, 1939-1975 (New York, Random House, 1980)

I'm ready to shoot my TV.  Honestly.  But for my family, I would cancel my satellite subscription (basic package only) outright and live off hand-selected DVDs.

The commercials are bad enough...intolerable, in fact.  Perhaps because I catch only the occasional network show, the frequency of commercials seems more overwhelming to me than most.  Rent some old TV shows on DVD and see how long the one-hour shows were just twenty years ago (about 53 minutes), versus today (about 40 minutes).  That's why there are no half-hour shows anymore - there simply isn't enough time for more than a page or two of lines, once the commercials take their ever-increasing pound of airwaves.  But, that isn't the worst of it.  That isn't why I've had it.  Let me explain.

Picture the Glorp race, residents of a star system some 987 light years from Earth:  The Glorps finally construct a device to decode the television signals leaving Earth today.  The Glorps of the distant future would be forced to conclude that Earth is a multicultural paradise, with two races living in blissful harmony.  The leaders are drawn from the Jewish race, which makes up about 50% of Earth's population, based upon the percentage of Jews visible in all public walks of life.  The Glorps would see that virtually everybody else of any consequence is Black, of course, with those Blacks holding the most prestigious positions - after all, today's movies all have Black Generals and Presidents and heroes of every stripe.

But the Glorps would see another race, too, because the villains always are vapid and ruthless Whites.  In fact, Glorps might well wonder why Earth's Whites have been allowed to live, given that we seem to be nothing but a drain upon society.  Incidentally, though we all know that TV does not reflect reality in many respects, Whites are being exterminated, just in case you truly haven't noticed.  And Jews are running things.  The one thing so dreadfully different from TV, of course, is the Black reality.

TV Blacks are smart, friendly, athletic, beautiful (with those never-mentioned White-caste genes everpresent), retiring, wise, helpful and in charge.  Real-life Blacks tend to be stupid, hostile, lazy, fat, mean, demanding and in jail.  Oh, give me a break!  Don't even begin to try to tell me it isn't true!  I really have no patience left for White people who deny the reality surrounding us all.

And it has nothing to do with racial "equality," either.  Otherwise, where on TV and in the Movies are all the beautiful, wise and worldly Chinese, East Indians, Japanese, Russians, Serbs, Arabs, Eskimos, American Indians and so on?  Why does affirmative action in the media always excessively favor just Blacks?  And why do Jews seem never to have to give ground, leaving that chore to the other White meat:  us?  Those are questions for another day, though you might want to ponder them in the meantime for extra credit.

I just watched a first-run movie on the SciFi Channel:  Alien Siege.  Standard plot line: aliens come...aliens harvest people...aliens get beaten back.  What also has become standard fare these days:  The General of the American forces was an attractive, wise and understanding older Black man.  The leader of the underground resistance was an attractive, wise and understanding younger Black man.  The villains and the stupid people, including the aliens, were all White, of course.  That's the way it is with the SciFi Channel now, you know.  I started watching their "4400" series, then turned it off in disgust when it became clear, early on, that the female blonde lead was on the make for Black guys, one of whom appeared to be the prime male lead.  I give up on the SciFi Channel.  I've simply had it.  I have a new motto now:  If I see Black, I don't go back.  SciFi Channel can depend upon its Black viewership for support from now on, so far as I am concerned.

The commercials came hot and heavy during the movie, of course.  I was most struck by Burger King's commercials, which presented a musical cast overwhelmingly composed of Black cowboys, Black women and several beautiful blonde White women.  In fact, I notice that not one single TV commercial these days gets by without a significant Black presence, usually anywhere from one-third to one-half the participants.  No more Burger King for the Steele household, folks:  If I see Black, I don't go back.  Let them make it on their Black clientele, which is what seems most important to them.

In fact, I'm making it my personal mission in life now, regarding all things I see advertised:  If I see Black, I don't go back.  No, it won't make much of a difference.  But if you join, too, it will begin to sting.

I gave up watching sports on television long ago:  just ten black guys running up and down the floor...or field...or whatever.  Put it in proper context, with a lion chasing them through the jungle, and I might just start watching again. But, to watch these grotesquely-overpaid drug addicts, sex criminals and intellectual midgets bounce a ball and make with jive talk and hip-hop, anti-White behavior?  No, thanks.  Let their team owners and sponsors be supported by their Black fans.

And the news?  I used to read a number of newspapers and magazines every day, as well as watch CNN nonstop.  I never missed the nightly network news.  I stopped all that, though.  Coincidentally, it was at about the same time that Blacks started being force fed to us via those venues as well.  I stopped because I got sick of getting nothing but lies and the party line.  But, it's of a piece, isn't it?  All those Blacks in unlikely poses and improbable positions simply are a part of the massive media lying that began in the 'Sixties and really picked up steam in the 'Eighties.

Join me, won't you?  Boycott products advertised with Black actors and models.  Make a statement:  If you see Black, don't go back.

Boycott TV shows and movies with Black actors.  Send the message that we are fed up:  If we see Black, we don't go back.

Cancel your subscriptions to newspapers and magazines that push Black articles, columnists and advertisements into your face.  There are plenty available that don't.  Not coincidentally, those that don't promote Blacks are the same ones that actually tell the truth about other things, too.  Tell them when you cancel:  If we see Black, we don't go back.

Get this, once and for all:  It is not racist to support your own race.

New America.  An idea whose time has come. 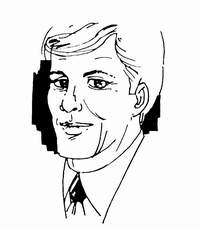 Forward as you wish.  Permission is granted to circulate

among private individuals and groups, post on all Internet

sites and publish in full in all not-for-profit publications.

Contact author for all other rights, which are reserved.

On-Line link to this article in HTML format:  http://www.conspiracypenpal.com/columns/black.htm

Edgar J. Steele is the author of Defensive Racism - An Unapologetic Examination of Racial Differences, now available through www.Amazon.com, though you can get a $5 discount by ordering directly from the publisher.  Visit www.DefensiveRacism.com for more information and on-line ordering information or simply click here: