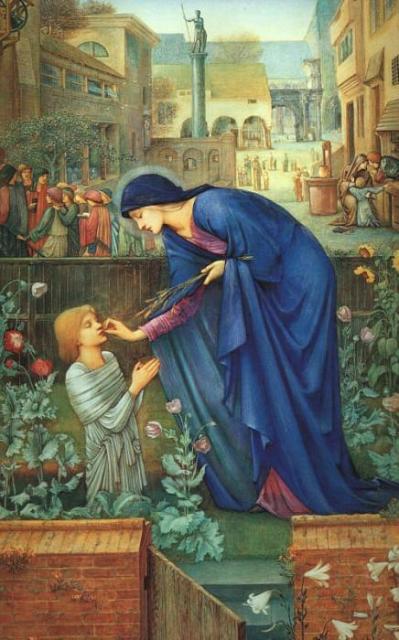 The Prologue to the Prioress’s Tale

‘O Lord, our Lord, your name how marvellous

It is, far spread in this great world!’ quoth she,

‘For not only is your praise, most precious,

Celebrated by men of dignity,

But in the mouths of children your bounty

Is celebrated too; for at the breast sucking

Wherefore in praise, as best I can or may,

Of Thee and of the white lily flower

Who bore Thee, and is a maid always,

To tell a tale I’ll now turn my labour –

Not that I may thus increase her honour,

For she herself is honour, the fountain

Of worth, next her Son, the soul’s salvation.

That drew down in joy from the Deity,

Through your humility, in you to alight,

The Holy Ghost, of whose power, your heart-light,

Was conceived the Father’s Sapience,

Help me to speak, and show you reverence.


Lady, your worth, and your magnificence,

Your virtue, and your great humility,

No tongue may express, nor no science.

You go before them, in benignity,

And obtain the light for us of prayer

To guide us towards your Son so dear.

My skill’s so weak, O my blissful Queen,

Ever to declare your great worthiness,

That I may not the weight of it sustain,

But like a child but twelve months old or less,

That can scarce a single word express,

So then am I; and therefore I now pray,

Guide my song of you, as on I say.

There was in Asia, in a great city

Of Christian folks, a ghetto for Jewry,

Maintained by a lord of that country,

For shameful profit out of foul usury,

Hateful to Christ and all his company.

And through its streets men might ride and wend,

For it was free, and open at either end.

A little school of Christian folk there stood

Down at the farther end, in which there were

A crowd of children, born of Christian blood,

Who learned in that school, year by year,

Such manner of doctrine as men used there –

That is to say, to sing and then to read,

As little ones when children do, indeed.

Among these children was a widow’s son,

Who day by day off to the school would run,

And also whenever he saw the image

Of Christ’s mother, as was common usage

And taught to him, would kneel down and say

His Ave Maria, as he passed by the way.

Thus had the widow her small son taught

To worship ever; and he’d forgotten naught,

For innocent children are quick to hear

Such things. And I remember in this matter,

Saint Nicholas, who is ever in my presence,

Who though young showed Christ due reverence.

As he sat in school over his primer,

Learning the antiphon from their reader;

And close as he dared he drew near and nearer,

And harkened to the word and the notes,

Till he had learnt the first verse by rote.

He’d no grasp of what the Latin might say,

Being so young, and of so tender an age;

But one morning he asked a friend, if, pray,

And tell him why it was in common usage.

He begged him to construe it and declare

Its meaning, often down on his knees bare.

His friend, who was older than was he,

Answered him thus: ‘This song, I have heard say,

Was made about our blissful Lady free,

To salute her, and also to her pray

To be our help and succour always.

I can expound no further of this matter;

I know the song; but have no grasp of grammar.’

‘And is this song made in reverence

Of Christ’s mother?’ asked the innocent.

‘Then I’ll employ all my diligence

To learn it all ere Christmastide is spent,

Though from my primer I must be rent,

And shall be beaten thrice in an hour,

I will learn it, Our Lady for to honour.’


His friend taught him it privately

Each day as they went home, till by rote

He knew it, then sang it well and boldly,

Every word, according to the notes.

Twice a day it passed through his throat,

School-ward and homeward as he went;

On Christ’s mother set was his intent.

As I have said, among the Jewry,

This little child, as he went to and fro,

Full merrily then would he sing and cry

‘O alma redemptoris’ and ever so.

The sweetness had pierced his heart, lo,

Of Christ’s mother, so that he must pray

To her, nor leave off singing by the way.

Our first foe, Serpent Satan, who has

Made in the Jew’s heart his wasp’s nest,

Is this a thing that seems to you full honest,

That such a boy shall walk by, as if blessed,

In spite of you, and sing out each sentence

That goes against the laws you reverence?’

From thenceforth the Jews there conspired

The innocent from out this world to chase.

A murderer, to serve this end, they hired,

Who in an alley had a private place,

And as the child passed by at a pace,

This wretched Jew caught and held him fast,

And cut his throat, and in the pit him cast.


Into a privy-drain him they threw,

Where the Jews purged their entrails.

How shall your evil intent you avail?

Murder will out, for sure, and shall not fail

God’s honour, there, especially for to speed,

The blood cries out against your cursed deed.

Now you may sing, ever following on

The white Lamb celestial – quoth she –

Of which the great evangelist, Saint John

Of Patmos, wrote, who says those who are gone

Sing before the Lamb a song all new,

Who never, in the flesh, women knew.

The poor widow waited all that night

For her little child, but he came not.

So, as soon as ever it was light,

Her face pale with dread, in anxious thought,

She, at the school and elsewhere, him sought;

Till this much she discovered, finally,

That he had last been seen among the Jewry.

With mother’s pity in her breast enclosed,

She went, and she was half out of her mind,

And ever on Christ’s mother, meek and kind,

She cried, and at the last thus she wrought:

Among the cursed Jews she him sought.


She begged, and she prayed piteously

Of every Jew who dwelt in that place,

To tell her if her child had been by.

They said ‘nay’ but Jesus, of His grace,

Put in her mind, within a little space,

To go from that place, where she cried,

To where he was, in the pit, cast aside.

This gem of chastity, this emerald,

And of martyrdom this ruby bright,

Lay there with his throat cut, upright,

And Alma redemptoris did he sing

So loud that all the place began to ring.

The Christian folk who through the streets went

Came crowding for wonder at this thing,

And swiftly for the provost then they sent.

He came anon, without tarrying,

While praising Christ, who is of Heaven king,

His mother also, honour of mankind,

And after that the wretched Jews did bind.

The child, with piteous lamentation

Was lifted up, singing his song always;

And with honour in a great procession

Carried to the abbey ere close of day.

His mother, swooning, by his bier lay;

Scarcely could the people with a tear

Drag this second Rachel from his bier.


With torment and shameful death each one

The Provost sentence on the Jews did serve

Who of the murder knew, and that anon.

Death for such wickedness he must observe.

Evil shall have what evil does deserve;

So with wild horses he did them draw,

And hung them then, according to the law.

Upon his bier still lay this innocent,

Before the altar while the Mass did last,

And after that the Abbot with his convent,

Hastened them to bury him full fast.

And when they holy water on him cast,

The child spoke, sprinkled with the water,

The abbot then, who was a holy man,

As monks are – or else they ought to be –

The little child to beseech began,

By virtue of the Holy Trinity,

Tell me what allows you thus to sing,

Since your throat is cut, as seems the thing?’

‘My throat is cut through to the neck-bone,’

Said the child, ‘in the manner of mankind,

I should have died – and long ago be gone.

But Jesus Christ, as you in books will find,

Wills that His glory last, be kept in mind;

And for the worship of his mother dear,

I may yet sing “O alma” loud and clear.

I have loved always, after my knowing;

And when my death I was about to meet,

She came to me, and bade me for to sing

This anthem in truth while I was dying,

As you have heard; and when I had sung

She laid a grain of seed upon my tongue.

And so I sing, and sing I must again,

In honour of that blissful maiden free,

Till from my tongue is removed that grain.

And after that, thus she spoke to me:

“My little child, I will come to fetch thee

When that the grain from your tongue they take.

Be not afraid; I will not thee forsake.”’

Touched his tongue, and so removed the grain,

And thus he gave up the ghost full softly.

And when the abbot saw this wonder plain,

And down he fell flat upon the ground,

And still he lay, as if he had been bound.

The convent of monks lay on the pavement

And after that they rose, and forth they went,

And took up the martyr from his bier.

And in a tomb of marble polished sheer

They enclosed his little body sweet.

There he is now, God grant we may meet!

Since it was but a little while ago,

Pray for us too, we folk to sin so liable,

That, in His mercy, God all merciful

In reverence for his mother Mary. Amen.