See the article that inspired this series here at Christogenea: The Beasts That Dwell Among Us

We generally do not use New Nation News as a source for our articles in this series, however their offerings in this area are often more current and comprehensive than what we report on here.

It isn't going to end, at least until Whites finally realize that the murderous negro animals roaming our streets are not "teens", and that there is no crime problem: rather, there is a negro problem!

Day after day Whites are raped, pillaged, and killed by negro beasts out for a quick fix or some temporary pleasure. They are not people, they are animals. Wild animals. It is time that Whites properly quantified the problem, and drove the animals back into the jungles where they belong!

Pictured here is professional angler Jimmy Johnson, and the beast who shot him in the face, killing him, when he got caught robbing his boat. The local news outlets referred to this beast, a negro animal with the Anglo name of "Shaun Brown", as a "teen". That is not any different than calling a puppy an "infant". Animals are not "teens".

High-Yellow negro bastard Philip Chisolm suspected with beating death of young White math teacher Colleen Ritzer. When will White Society learn that animals belong in zoos, and not in schools?

If wild beasts were kept off of the streets and out of the cities of civilized society, our children would not be so threatened.

There was a time when wild beasts were shot on site, and then people were safe in their homes.

Where is the mainstream media outcry concerning these four White women, and this horribly racist black-on-White "crime"? Whites, and especially White girls and women, are being raped and slaughtered daily by roving negro beasts, yet the national news media seems not to care.

However if one black is harmed by anyone with a White name, even when the bearer of that name is not really White, there is immediate national media outcry concerning "racists" Whites.

The hypocrisy of the Jewish-controlled media in America and around the globe is startling, and we do not understand how the general masses can miss it. 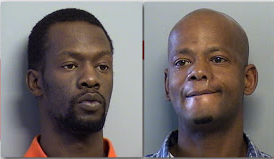 At right, James and Cedric Poore

From the Standard-Examiner (Click here for a screenshot copy of the original page):

[Click here for the statement from the victim's family, also recorded at the Standard-Examiner.]

LAS VEGAS — A former high school football coach and teacher from Florida was sentenced to three months in jail and ordered to pay a $5,000 fine Thursday after being convicted of involuntary manslaughter in the one-punch death of a Utah man at a Las Vegas casino.

Hawkins has remained free following his November conviction in the death of 46-year-old John Massie, an occupational safety and health worker at Hill Air Force Base.

“We’re just as disappointed in this as we were the verdict,” said Buchanan, who had sought only probation for his client.

“He has no family members here, so he’ll be here to serve that punishment and then head back. So obviously it’s very difficult,” he added later.

Prosecutor Maria Lavell had sought a sentence of one to four years in prison.

When will Whites learn, that every negro roaming around freely is a wild animal waiting to devour some precious White woman or child?

(AP) FAIRFIELD, Calif. - Police say they have arrested a 32-year-old man in the death of a teenage girl whose naked body was found in a Northern California park a week ago.

Fairfield police say they arrested Anthony Lamar Jones of Fairfield on Friday morning after having him under round-the-clock surveillance as a suspect in 13-year-old Genelle Renee Conway-Allen's slaying.

The seventh-grader was reported missing Jan. 31 by her guardian at the foster home in nearby Suisun City where she lived. A passerby found her body the next morning in a park.

How many more young White women like Genelle Conway-Allen are going to be destroyed by these wild beasts, before they are taken off of the streets of White neighborhoods permanently? Whites are committing genocide against themselves by allowing this to continue under the charade of a "crime problem" when in reality it is a Negro problem!

If packs of wild wolves were roaming our streets and devouring our children, nobody would think twice about going out and shooting all of the wolves, whether or not any particular wolf had engaged in such behavior previously. So why do Whites not have the same attitude with Negros?

It's Not a Crime Problem, it's a Negro Problem. And it is going to remain a Negro problem until it is recognized that Negroes are the problem. Niggers like Jamie Foxx can brag about killing all of the Whites on national television, so it must be open season on Whites, because there is no national outrage. Imagine the non-stop media uproar, the endless demonstrations and rallies, if the roles were reversed. Yet well over 90% of violent crimes involving Blacks and Whites have Black perpetrators and White victims. How is this not a war against Whites, where the Jewish-controlled mass media is the primary enabler of Black belligerents?

While two of the three perpetrators arrested for the shooting have been identified as Diantay Powell, 18 and Antonio Edwards, 19, pictures of the accused are missing from all of the news agency reports which we have been able to locate on the internet. None of the major SF media outlets have as yet posted pictures of the perpetrators. For that reason alone, we are confident enough to identify them as Black. If they were White, their pictures would be plastered all over every news agency outlet in the nation.

BEAVER FALLS (KDKA) – A young father is left to care for his little girl after the child’s mother was shot and killed.

The suspects are not even old enough to drive.

According to police, the victim was shot just because she refused to give three boys a cigarette.

Police have arrested a 13-year-old boy in connection with the murder, but they’re still looking for two more.

Beaver Falls Police believe it is just a matter of time before they find and arrest two 14-year-old boys as well.

Meanwhile, friends and family of the victim, 22-year-old Kayla Peterson, are wondering why the she was killed over something petty.

“There was only one shot fired and it went through the gate and took her life,” Peterson’s boyfriend, William Bailey, said.

According to police, two 14-year-old boys and a 13-year-old boy followed Bailey home from the store asking for cigarettes.

“My girlfriend came outside to see what was going on because there was commotion and she told them to go get a job and quit running the streets and quit bumming cigarettes. The kid was standing over in the alleyway and he just shot at her,” Bailey said.

One of the 14-year-old boys, Todavia Cleckley, posted a picture on Facebook of himself posing with two handguns.

The other 14-year-old boy has been identified as Marcus Velasquez.

“It’s hard. She has a 23-month-old baby that’s left with nothing,” Trish Stuck said.